Poonam - love in hindsight; a second shot at love and life

BANGALORE, India, Aug. 21, 2020 /PRNewswire/ --  Produced by Shilpi's Voice & Visuals and Epicreel, Poonam is a story of love, sacrifice, abandonment and giving life and love, a second chance. Conceived three years ago, it wasn't easy for the team to execute this project with no background in film industry. Aided by Anil Kumar P of Epicreel and with great help from Sanjay Sanwal, the director of Poonam along with great team work and camaraderie, it is an accomplishment that the film is winning accolades from many sections of the society. Poonam is slated to be privately screened, in partnership with Unmukt Senior Hub, on 22nd August, 2020. 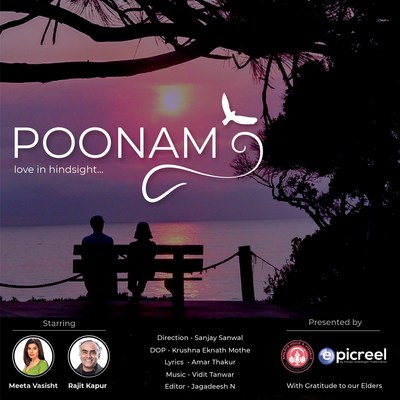 Speaking on the occasion, Shilpi Das Chohan, Founder, Shilpi's Voice & Visuals, said, "Elderly Care and the loneliness that comes with its negligence is a cause that needs to be addressed by society, organizations and authorities with sensitivity and sense of responsibility. It is high time much care is taken in streamlining simple facilities and revisiting policies for the ageing population. We decided to use the medium of film to tell the story of Poonam and Suraj to evoke a wave of introspection."

Producer, Shilpi Das Chohan, after a decade of corporate experience and a few years of sabbatical, restarted as an entrepreneur and founded Shilpi's Voice and Visuals. Her core skill of being a voice-over artist is showcased as the narrator across 'Poonam'. Added to that, her temperament, logistical, organizational skills and perseverance, made 'Poonam' a realistic possibility. Her 'never let go' attitude was critical to making the film.

Executive Producer, Anil Kumar P is an experienced and renowned techno-marketer, film buff with interests in art, social challenges and antiques as well as fast cars. He came on board to help and organize the production in addition to providing the much-needed aesthetic touches. The technological skills along with his aesthetic sense came forth by being the post production controller. He is the Chief Marketing officer at Precipio Technologies Private Limited (brand: Epicreel).

"Poonam has been a gratifying experience. Being a movie buff, I have always dreamt of making a meaningful movie that has the power to invoke a social change. Films have influenced my life, guided me on good and bad days, and made me whole. I am sure people watching 'Poonam" will introspect and take up the cause of elderly loneliness and their need for companionship, more seriously, instead of getting on with their lives, just because they were born earlier," says Anil Kumar P.

It was Director, Sanjay Sanwal's suggestion to choose Nainital as the location for shooting the film. Visually engaging backdrops enhances the viewing experience and he suggested that it was in the best interest of the project to not compromise on these aspects. Since he is a resident of Nainital, he did his homework well in finalizing the right locations for the right scenes.

'Poonam' is a very simple story that revolves around two characters - Poonam and Suraj.

Poonam is played by Meeta Vasisht - 'Poonam' personifies a strong, contented woman who is warm, passionate, forgiving and forthright who decides to live life on her own terms. She emerges stronger through life's experiences. It was decided that Poonam's title role has to be played by none other than the elegant actress Meeta Vasisht. She lived her part not just as the protagonist - her expertise, experience and demeanour were well-suited to portray these attributes.

Suraj is played by Rajit Kapur -  'Suraj' represents a parent who has performed all his duties as a father and husband within the social norms. Yet, when it is time for him to be cared for, he finds himself abandoned and lonely. Suraj, the metaphor, ends up feeling lonely and dejected, finding himself at the brink of giving up on life. Rajit Kapur is forever cherished as the very own Byomkesh Bakshi, and the team knew the audience would connect with him. He connected with the cause, the character, and the film compassionately.

Poonam is a simple and short story of two elders, who drifted away in the past, to fulfil social responsibilities. At an age when they were expected to be taken care of, they find themselves at a catch-22 crossroads, abandoned and alone. Quite relevant and prevalent in today's world when grown up children look to greener pastures and abandon their parents due to circumstances or pure neglect.

The objective of 'Poonam' is to spread the much needed awareness on what such elders go through and to ask their children to introspect and if possible, change the way, life goes on today.

About Shilpi's Voice and Visuals (The Producers):

Shilpi's Voice and Visuals is a voice-over entity and a marcom agency, catering to clients across the globe.

Epicreel, a brand of Precipio Technologies Private Limited, deals with video making and marketing, both branded and other wise.